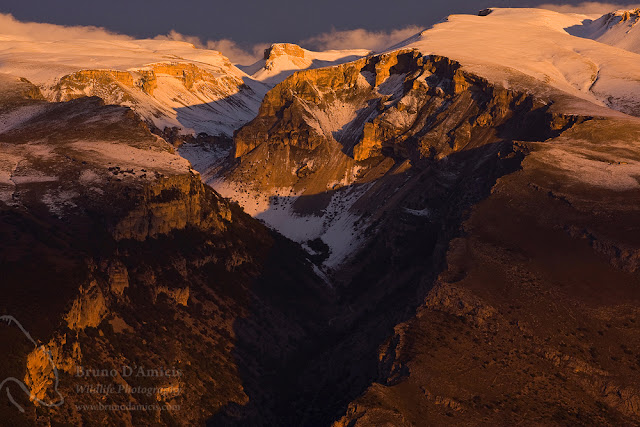 Shapes and lines, impressions and brush strokes of red, blue and black were shining on the screen: the picture of a deep canyon photographed at sunrise after a light snowstorm opened my lecture. The always pleasant-to-hear “Ooohs!” and “Aaahs!” were there to welcome its appearance and when I asked the audience wether they knew the location shown in the picture, people appeared confused. “Himalaya!” suggested a woman; “No. It's in Canada” shouted a man in the very back of the theater. I was disappointed or, better, I was shocked: two-thirds of the audience were represented by the staff of a national park in Central Italy and none of them was able to recognise a very distinctive valley of the nature reserve, which lied just 20 kilometres from where I was speaking! Could they really have overlooked the valley, or was perhaps the magic light in the picture making it look different? When I finally revealed the location, most people were suprised and a few smiled at me. One even said, “Oh yes, I was about to say so...”. Once again it seemed to me as if, ignorance apart, the trained eye of a photographer might have seen something special for the majority and realized an image that apparently went beyond the general perception of that particular subject.


A few years later, in a completely different situation, two curious Ladakhi men were , completely in awe, at the LCD screen on the rear my camera. They had paused on their walk to watch me photographing at the side of the trail. I was now showing them the picture I had just taken of the scenery in front of their village: round slopes of a very colorful hill ending against the rugged outline of an Himalayan peak. The view was breathtaking and the light of the afternoon was nice, but the picture was probably nothing more than a record shot. Yet, I was puzzled by the incredible response of those two men: they couldn't stop looking at the little screen and seemed completely speechless in front of it. Their astonishment was palpable and it made me reflect on the situation. The guys had always lived there and that scenery must have been nothing new for them. Tourists and cameras must have been seen in those mountains already for some decades. Besides, due to rather conventional light conditions, that very same scene must have occurred hundreds of thousands times in their lives. It must have been something else: it seemed as if they were seeing it for the first time.
These two anecdotes show some similarities, although they took place in two distinct contexts and are probably born out of two very different human experiences. Lack of interest and superficiality have possibly determined the people response in the first story, curiosity for what is new, exotic and perhaps the vivid colors of my camera to be considered in the second one. These two events made me reflect on the very peculiar reaction we manifest whenever we look at something which appears on a screen.
More than often we seem to be naturally drawn to look at a restricted, reduced and flat reproduction of reality rather than the world itself. Images seem more interesting and our impression of the subject itself seems in this way to last longer. Our brain (our “memory”) retains still images and these probably have a stronger impact on it than the flow of real events. It has always been like that, and since the digitalisation of photography and the wider access to cameras or camera-like devices the occurrence of this aspect could only increase. The result is now in front of everyone: looking at a screen has become today perhaps one of our commonest acts. Images grab our attention immediately: they provide some real fun that can be even shared with others. This is what makes photography and visuals magic and so incredibly powerful; it is probably the reason why me and you are now reading this blog. 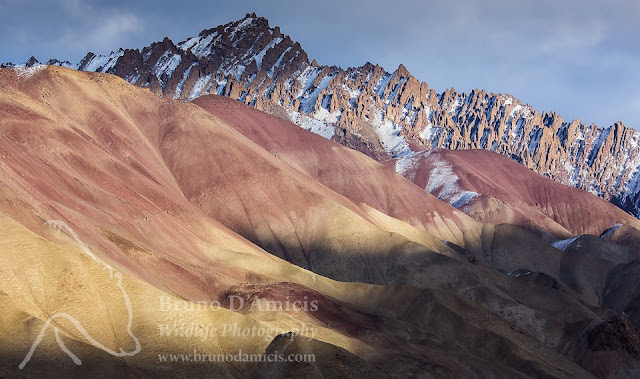 
Yet, this aspect can also have some serious consequences, I am afraid. When in a culture images (“reproductions”) get more valued than reality; when our visual expectations of something start to be based mostly on pictures, then we need to re-focus our attention. What represents the great success of photography in our world, in fact, can eventually turn into its nemesis.The incredibly high standars nature photography has reached today and the (usually) peaceful competition they trigger among us, photographers, are pushing our imagery incredibly far; sometimes too far... On-location wildlife photography facilities and extraordinary post-production tools can easily allow some people to obtain images which have nothing to do with nature anymore. When these mix with the typical human desire to stand out, results can get indeed pretty “wild”. By commending such images, international contests and publications then boost this mechanism even further. But this is an old story... Even before digital photography came out, the trend was set already for a long time.Photography should retain its great value, which is being a powerful stimulation for us to set out exploring the world, a tool to make emotions timeless and share them with others; but this not at the expenses of losing connection with some real life experience.I feel we should make sure that for no reason images do get rated more than the vision and the emotions lived by the photographer in the moment he/she took them. At the end, photography is there to allow us, humans to communicate with each other about what we love, not to create an artificial, high-definition world, whose vivid colors might seem nicer but which would strip Nature of its ordinary, yet unfathomable magic.

*Article first published in 2016 on "Forum Naturfotografie" magazine in Germany
Posted by Bruno at 10:08 AM