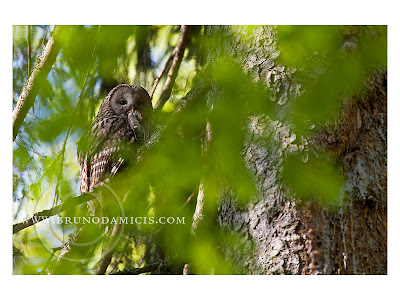 On a special assignment of the Bayerischer Wald National Park administration, me and other eight nature photographers had four days to roam and take pictures in the wildest corners of the National Park (far away from the "Tier Freigelände"...), to celebrate its 40th birthday. On the last morning there I was blessed with this encounter: a fabulous female Ural Owl bringing food to the chicks. The Bayerischer Wald NP (together with the neighbouring Sumava NP) is much more than just its animal enclosures: it is wilderness coming back into the center of Europe! Happy birthday BW!
Posted by Bruno at 10:08 AM No comments:

Pit stop with black grouses. Or, "how to detect a vanishing species".

"We stand now where two roads diverge. (...) The road we have long been traveling is deceptively easy, a smooth superhighway on which we progress with great speed, but at its end lies disaster. The other fork of the road -- the one less traveled by -- offers our last, our only chance to reach a destination that assures the preservation of the earth." Rachel Carson
Black grouses have been one of my photographic nemesis during the whole time I was working in Slovakia. They are not particularly difficult (once one knows a good spot and obey the rules of the game - set up your hide at night, get there when still dark, etc.), but bad luck always played a role on all the attempts I made in Tichà and so I never got a single, decent picture... 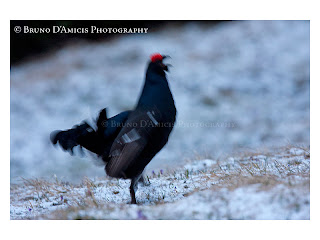 Therefore, while I was planning a trip to the Bavarian forest in Germany on mid-May, invited by the National Park to photograph the Park's wildest corners (and not the animal enclosures...), I decided to try my luck with this species one more time and stop somewhere in the Alps for just one morning attempt. My friends and great nature photographers Luciano Gaudenzio (www.naturalight.it) and Gabriele Bano kindly invited me to a grouse lek (area where the males display) in Friuli, the region where they live and work. The area sounded very promising, with stories of more than 40 (!) displaying males back in the 80's. This, and maybe all the kilometres driven the day before, made difficult to catching some sleep in the already short night. We would get up at 2.45 AM and walk to the hide in the darkness. A thin layer of fresh snow on the barren ground, stars in the sky: the best premises. Already before sunrise the first male came in front of the hide. After this one, other four reached the lek. Only the calls, a loud "chooissshhhh" and the repeated, fluid "rooo...proooo", revealed their presence in the fading darkness. Once outlined their figures, I tried some pictures with crazy shutter speeds of 2-3 seconds, just to see what they would look like. The sun came out, or, better, the day came out, as a sudden layer of clouds had obscured the clear sky. The resulting hours were nice, but the light was dim and quite boring for any good picture. Nevertheless, I won my nemesis and got some pictures of a black grouse! At 7Am the birds left and for me was time to pack all my stuff and quickly make my way to Germany. It had been a nice "pit stop", especially by enjoying the great company of Luciano and Gabriele Bano, the breathtaking mountain landscape and the colors of this unique bird: I was happy. 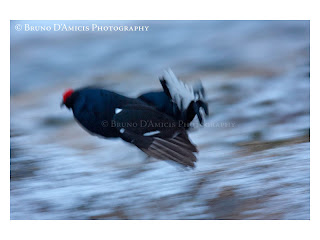 But, hey, wait a minute. Five males? Where were all the grouses gone? As said, people once witnessed dozens of birds here, so what was going on? We asked some locals that morning and figured out that the previous hunting season surely took a large toll on this population. Could that be the cause of such a rapid decline? Even in other European countries, where I had the chance to observe this species, people spoke of sudden decreases in numbers. In Tichà, for example, nowadays only few single males come to the alpine meadows in May. What is going on? Is overhunting the one to blame? Could it be that this once-common mountain bird is suffering from a vast, unknown menace? Climate change?? Will the Black grouse be a next vanishing species? What can be done to save it? 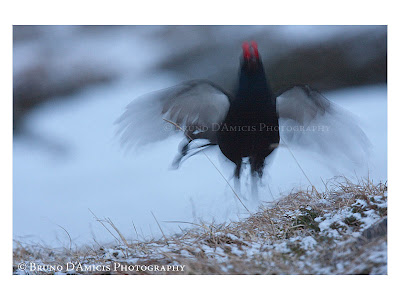 Way too often I am experiencing or hearing stories similar to this also about other species. It is a weird time to be a wildlife photographer and a though one to be a conservationist. There are few answers for many questions. But one thing is for sure, we cannot take the diversity of Nature for granted anymore. It is time to do something and act firmly, before spring would become silent even in the most remote corners of Europe!
Posted by Bruno at 2:54 PM No comments: