The truth which lies out of the frame* 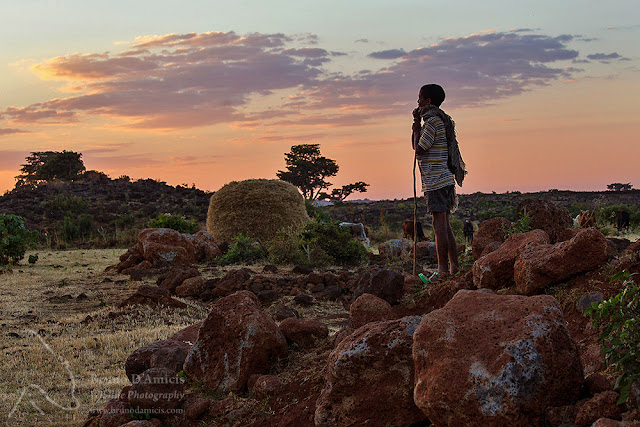 (A young herder watches his cows at sunset on the shores of Lake Tana, Ethiopia. 2013)

Last year I had the great honour of joining the judging panel for 2015 of the World Press Photo Contest (WPP), one of the most prestigious competitions in the photography industry, if not THE most important competition in the World for what concerns photojournalism. This has been of course a very interesting and instructive experience for me. Although my contribution was limited to the sole Nature category, I have been nevertheless involved in the following debate triggered by the disqualification of Giovanni Troilo's story on the city of Charleroi, Belgium. The work of the Italian photographer had first been awarded in the “Contemporary issues” category, then, because of complaints forwarded by the Mayor of the city Troilo had photographed and of alleged falsifications (ie. staging) of some of the pictures, his submission has been scrutinized again by the WPP general jury and more in-depth. Some picture information were not in compliance with the competition's rules and eventually the prize has been withdrawn. But the fact that some images appeared to be staged was probably at the core of the issue. Well, this is nothing new, you might say, and everybody can easily follow the whole story of this controversy on the web rather than here. What is relevant, in my opinion, is the massive quarrel that these news have generated concerning the basic definition people have of photojournalism and documentary photography. Many top names stated that if those images would have retained the award, that would have meant the end of photojournalism. Others instead tried to argument that photojournalism as we (want to) know it is long dead and that we should finally come to accept the different ways now one has to cover a certain subject and tell its story. Interesting, but what on Earth does it have to do with nature photography?

In a world where photojournalism is still identified with authenticity, this story had some huge repercussions and invited each of us to reflect more in depth on the general idea of truth in photography. I asked myself wether documentary photography can be still considered genuine or not. I have looked at the issue from my perspective of nature photographer and considering the various degrees of tolerance this discipline allows. As you might foresee, I have realized that the answer is definitely not a straightforward one.
I had already partly written on this on my very first column appeared on these pages and, in different forms, this is surely a topic that has been debated “ad nauseam” on every possible existing platform. For example, I bet that in every nature photography association or club you might have knowledge of there must have been at least once a lively discussion on it. And, almost always, such endless debates remain unsolved...

Most of non-nature photographers (there are also some hardcore disbelievers, of course) often assume that our hobby/profession must be one of the very last strongholds of pure documentary photography and thus look in genuine awe at our images, evaluating them by the odd and “exotic” worlds they reveal to their eyes. Or, perhaps more naïvely, they do so by commending the tremendous effort the photographer must have put in them. People still consider nature images “true” or want to believe they are. On the other hand, we all are aware of how far from reality unfortunately all this can be. I don't think I need to summon here the infamous facilities where animals are raised just for the purpose of the visual media industry (we used to call them “game farms”, remember?) or all the more or less harmful trickery we regularly make use of to take memorable images. Humans' ingenuity doesn't know borders and so there is a universe of available tricks, perhaps as many as the nature photographers shooting out there: they span from baiting brown bears with dog cookies, to spraying glicerine drops as fake dew on flowers; from cooling down restless butterflies in the refrigerator to simply whistle at a passing deer to make it look at the photographer... There are indeed endless possibilities to make our vision become “real”. The quality standards are so high that we are almost forced to embellish reality in order to make it more appealing, and because of this pressure the result often seems to justify any method. Some ways are easier to accept than others; some are “minor sins”, whilst other remain definitely bad behaviors. Even if we know that the situations are not so realistic anymore, in most cases we are not capable to judge the authenticity of the images and thus accept them with good faith. Apparently there is no hope for defining true nature photography, then.

Beware, I am not here to draw attention again on the ethical aspects of nature photography, but instead on what we consider as “true”. Let me explain it better with an example I know quite well: myself. I have always thought to be a true wildlife photographer. One who spends enormous time researching on a subject and waiting somewhere for it to appear or do something, and avoiding as much as possible any interaction with it. I mostly refuse to use tricks and sometimes looked with dismay at those photographers who made the goal prevail on the process. On many occasions, my fundamentalist approach has not turned very productive and I had to live with its consequences: much weaker images than those taken with other methods. But it has been always OK, since I strive to experience nature rather than represent it and to inform people with a correct message.
I have long considered this approach to be “authentic” and pure, but have never really tried to look at myself from an external perspective. Does my approach guarantee for true images or am I perhaps missing something?
The fact of being there, of leaving my smell around of drawing incidentally the subject's attention probably was already an interaction with the subject. Besides, since we all know that photography is more about what is left out of the compostion than what is in, my choice of lenses and framing together with the editing process is also there to determine entirely what I would end up showing people or not. These thoughts opened my eyes. There is no way any of my pictures could be considered fully authentic.
So, I started reflecting on the fact that photography, even in a scenario (the natural one) where our control can be minimal, is and will forever remain a form of art: the realization of a strong mental image. Therefore, we can't keep on fooling ourselves any longer by pretending photographs to be 100% true and pristine views of the world. We are humans and photography can be of our tools allowing us to explore the Planet, learn about ourselves, express our vision and share all this with others. Great, but this comes at the price that we will always be in the images, then. We must take into account the photographer's input every time we look at an image. This doesn't have to be necessarily bad, but can truth be found at all in documentary photography?

Of course it can! The truth is still out there, shining bright as never before. Only we shouldn't look for it in single images. The truth cannot be found in the picture: it lies out of the frame. ­It spills from the approach and the intention of the photographer. His or her choices define the message and thus confirms the power, and the responsibility, offered by this visual media. It shouldn't be seen as a defeat but actually a great reaffirmation of the importance of the individual's own vision and commitment.

*Article first published in 2015 on "Forum Naturfotografie" magazine in Germany.