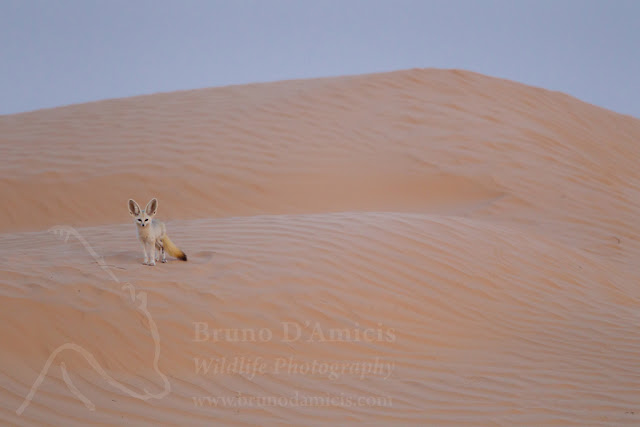 January, Central Apennines, Italy
The ridge was now just fifty meters above, I pressed on and made the last paces in apnea. It was over: I climbed for almost three hours in the darkness, panting and cursing my heavy backpack and the 500mm, camera and tripod leaning on my right shoulder, to reach at sunrise the mountain meadow where I had found so many wolf tracks the previous week. Before getting over the ridge and thus reveal my human silhouette above the horizon, I ducked, placed camera and tripod on the ground, dropped my bag and crawled to the rim, binoculars in hand, to check the situation first. I slowly scanned the surrounding grassy slopes ending on that natural terrace: in the morning light a big herd of deer and a family of wild boars were peacefully feeding on the opposite side of the meadow. No sign of wolves. I retreated to change my wet shirt and eat a snack in front of the grand landscape. The sun was getting stronger by then. I moved back to the ridge and sat under a big rock, resting my aching back against it, in plain view: I knew it was over for that morning. The deer had immediately seen me and were now all staring in my direction: 160 eyes following my actions and making me feel naked. I had disturbed them and they started moving higher and farther. But then I noticed what seemed a deer resting alone and much closer. Just 100 meters from me and partly hidden by a bush of juniper. I raised the binoculars: a spectacular wolf in its prime winter coat was sleeping, completely unaware of my presence! I could see its ribs rising with the breathing and its legs moving frantically: it was dreaming. Although I could have photographed it already from my position, I didn't think twice and in a bunch of seconds I was already dragging my camera setup to find a better and more open view of the animal, for a cleaner composition. I moved carefully but I was completely visible: yet the wind was blowing towards me and I was confident the wolf would not notice me. Fast-beating heart and sweating hands, I was already tasting the images I would take that morning.
Just ten meters to my left and I could admire the wolf in its entirety. It did not move. I checked it with my binoculars and I was shocked to see its amber eyes fixed on me, more curious than afraid. Instead on freezing immediatly, I hurried to setup my tripod and shoot. What a mistake! The wolf was already on its legs when I could focus my lens; it started running away as it heard the first burst of pictures.
It all had lasted a few seconds and where before I was experiencing a precious wilderness moment, now only emptiness and silence were around me. After the wolf presence was gone and all the deer escaped, I was just in a mountain meadow: I had ruined everything. And because of photography.

Now, these are just two stories among many, but as usual my pen took me much further than these pages allow. I lost count of the times when I regretted being a photographer. Once it is the pathetic weight of the backpack to ruin a walk; once it is the noise of the camera to scare an animal; sometimes it is the worry for the safety of the equipment to curse a journey, but above everything is the urge of taking good pictures that can often spoil our best moment. Photography claims for such a high attention for details, in fact, that sometimes it can be a serious obstacle to a direct experience of Nature and makes me often think to give up on it.


But, then, I wonder: would I ever climb for three hours in complete darkness with twenty kilograms on my back or spend four weeks roaming a desert, if there would be no challenge of making an experience timeless and accessible to everyone else through the impact of a good picture?
Posted by Bruno at 6:14 PM No comments: