My little "heart of darkness" - part two of three 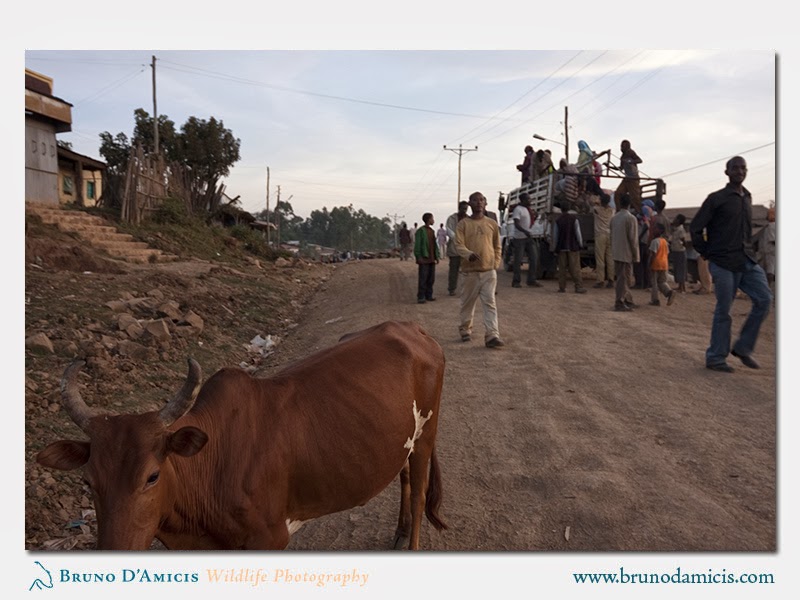 Bonga. At 2000 meters altitude, the capital of Kafa is a maze of dirt tracks, which cross an undefinable set of brick, mud and metal buildings, all interspersed by banana and enset plantations. You breathe the smell of rancid butter, roasted coffee, smoke and spices. A few horthodox churches, three restaurants, two hotels (one serves also as a brothel), a hospital and a weekly market: here live about forty thousand people and at least as many heads of cattle, in addition to dozens of black kites, ravens, vultures and hadada ibises that take advantage of the situation. All around, at few kilometers of distance, lush and unwelcoming, the Forest.
To get there it takes a whole day by jeep from Addis Ababa. The road follows the ancient landscape of the Rift Valley and crosses (literally) dozens of villages, where the driver must carefully dodge chickens, cows and kids. You leave the asphalt to Jimma, a half of the trip; then it's all dust and sand until here. It seems that this will no longer be a problem: Chinese and Korean investment will bring soon the asphalt (and traffic) also to this final stretch.
From Bonga start all expeditions to the Kafa Region and, therefore, also my photographic adventures. Following a radial gradient, to get to the wildest areas, one need to overcome the patches where the axe, fire and livestock have made the forest back off. 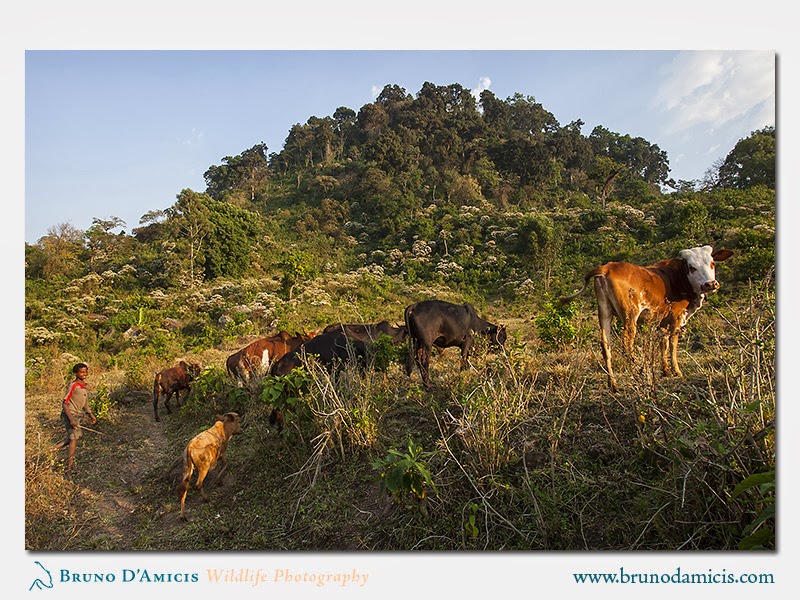 At the end of January 2012, having covered more or less all photo objects that my assignment required, I focused on the search for the alleged forest lions. Fresh information about livestock attacks that occurred near Adjo (a name that says it all...), a village situated over sixty kilometres from Bonga at the southeastern border of Kafa.
After nearly four hours of Land Cruiser and dirt roads, we arrived at this little group of houses scattered around a colourful circular building, halfway between a church and a tucul hut. Muluken, my young interpreter, told me that it was the palace of Habedagoda, local noble man and religious leader. The only truly recognized authority in that area, to whom we were supposed to ask informations and, more importantly, permissions to move in that territory. I, a farangi ("foreigner"), was announced and was asked to wait. Dozens of flies and at least as many pairs of staring human eyes were concentrated on me: I was definitely the event of the year for the villagers. I pretended to ignore that and looked up to the sky. Several African griffon vultures were soaring above us. After half an hour, I did enter the building round. Inside, apart from the darkness and a very strong odor, I saw that the walls were covered with old photos, fake flowers and portraits of Jesus.
Some men stood against the wall around an imposing figure sitting at a small table. White Nike sneakers, a red-green-and-yellow vest, a cream-coloured cowboy with "made in China" written in gold caracters on it; all under a black and gold cloak: Habedagoda leader shook his giraffe's tail fly swatter. An old spear was also standing against the wall. I was appalled and felt truly privileged to be there: a little like the poor brother of Indiana Jones or a wanna-be Claude Levy-Strauss of the third Millennium! 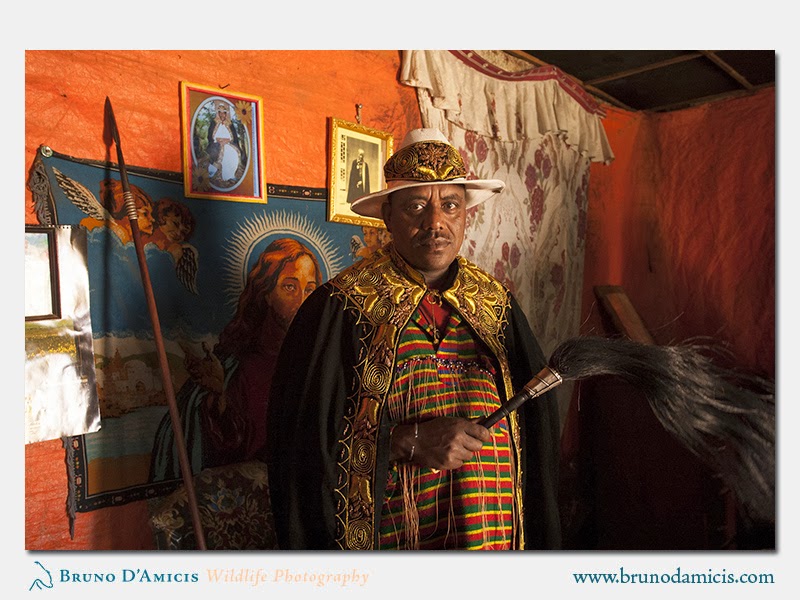 I was invited to sit down (at a distance from leader) and I was offered coffee. After a few moments of embarrassment, Habedagoda began to ask me questions in dialect kafinho: he asked me about everything, including my monthly salary and the eye color of my girlfriend, and the interpreter had to translate our entire conversation. We explained to the chief our mission and he confirmed that He was nearby and had killed several cows. He spoke with great respect and with a bit of awe. (Do note, that nobody in Ethiopia would ever dare to utter the word "lion". It would be a blasphemy, as this is a legendary and highly respected animal: it is ambassa, "king", and appointing him would be enough to draw his rage.) Then, Habedagoda generously offered us hospitality and help, a high quarter of cow (which I politely declined) and two village hunters as guides. This provided that, every night, we would report a detailed account of our excursions. I understood he liked me and even dared to take some shots with my camera. That morning, nobody mentioned if what we were doing was dangerous or not. 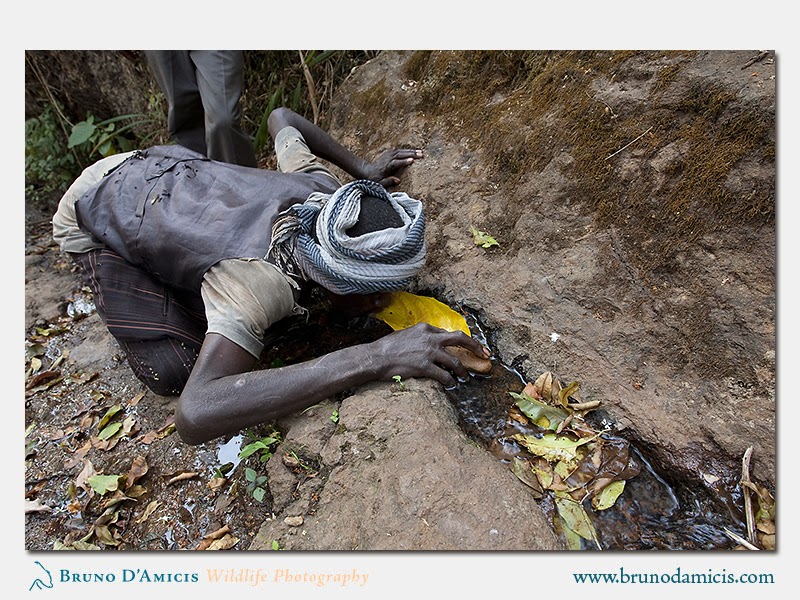 And so began our search for the lions, carried out in a very unorthodox way. Instead of scanning the landscape from the comfortable seats of a Land Rover driven along dusty roads, in fact, we went backpacking, beating the steep slopes of the area. For five days, we roamed the silent forests, crossed turbulent and foaming streams, by walking (me crawling) on super slippery tree trunks put crosswise, and sweated the proverbial seven shirts. 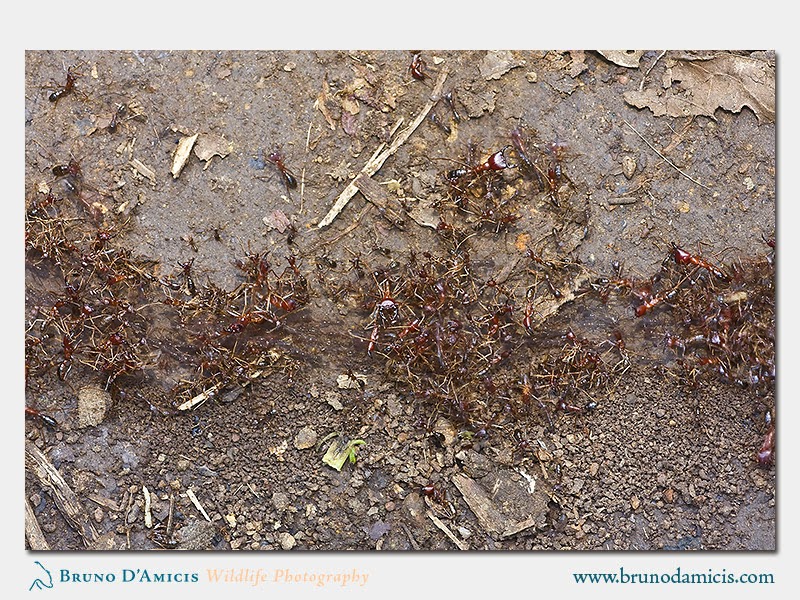 And, again, spectacular rocky gorges and thick prairies of yellow grass that arrived to the chin (perfect for a lurking lion, for instance): my guides kept saying "we are very close", "here they have been seen a week ago" and "look here, the grass was crushed by one of them asleep." Instead of a safari in Africa, to me it looked only like the umpteenth (and useless) hike in the footsteps of the bear in the Abruzzi mountains and smelled stench of failure. Luckily, the monotony was sometimes interrupted by cries of a family of blue monkeys, the fleeting vision of a turaco or the stabbing bites of giant ants.

Every night, as we returned exhausted to the village, in addition to fatigue I was also responsible for entertaining the chief, reporting faithfully all the events of the day and waiting for its approval and that of our faithful "audience". When, late in the hour, I would eventually walk into my tent, I was happy because I could finally be all alone … (to be continued) 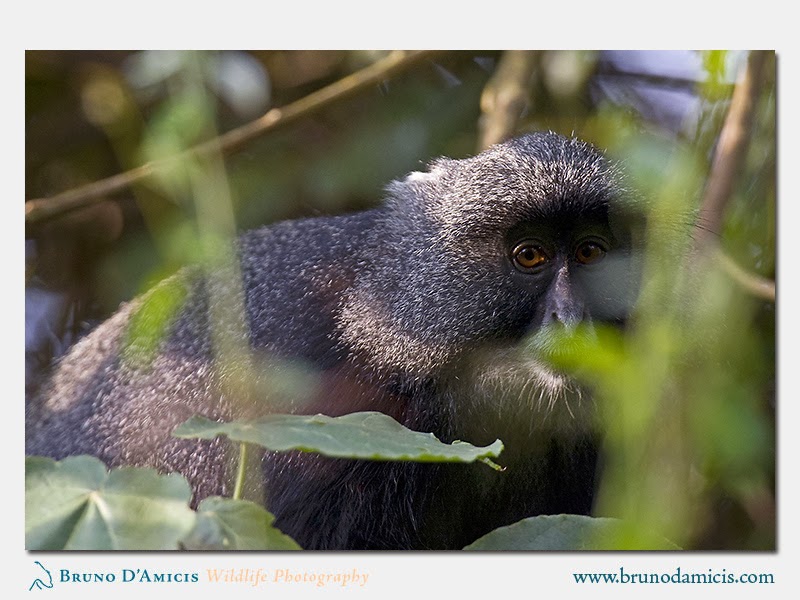