The gift of the Bear 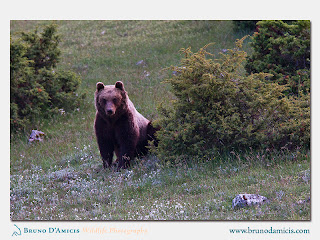 A day in May
The other night He has come. It had been already five or six afternoons that I was there waiting, lurking under a juniper in the anonymous valley at the border of the beech forest. I was feeling the fatigue from the many hours of waiting, but I didn’t get bored. The first evening a wolf, perhaps lost in its thoughts, had passed less than ten meters from my position; I had closely followed the exciting dalliances of cuckoos, and every afternoon I had fun searching with my binoculars for deer, wild boars, hares, and foxes in the surrounding meadows. That day, cool from the downpours of the previous days, was now drawing to a close and a sunset still different from the previous ones casted spots of lights on the mountain tops in the distance. After the sun had dropped behind the line of the hills and the nightjar began to sing, I realized that even that day He would not have come, and so I disassembled the camera equipment, stalled for hours on the tripod. Too bad: I really needed Him.
So, I stood up and loaded the backpack on my shoulders, turning back only to give a last glance at the valley. And then, as tradition dictates, I have seen Him. He was moving slowly through the old junipers, with the muzzle down and the fur golden and shiny, beautiful and perfect like all the good things of this world.
With sweaty hands and drumming heart, I crouched down again, slowly unloading the backpack and trying to quickly replace the equipment with all necessary precautions to minimize noise. In twenty seconds, the camera and telephoto lens were ready and I, on tiptoe, approached Him. My legs were shaking, but He was busy sniffing among rocks and shrubs and the wind was blowing towards me. Seventy meters ... fifty ... forty ... I so wanted to spend that evening with Him.
More out of habit than actual need, I hid under a blackthorn. I then placed the tripod, framed the picture and pressed the shutter button. He heard it and stopped immediately, turning His great head toward me: I was too close. The ears pointed in my direction, the nose up to sniff the wind (I could hear the sound of it) and the two little brown eyes that seemed rather perplexed in the advancing darkness. I remained still and holding my breath, waiting for His inevitable escape; furious with myself for my unseemly hybris and impatience. But, instead of running away, He sat down, continuing to look in my direction. And, for once, in His presence I felt something that I could define like an ancient and healthy fear. I felt so small and useless, while He was so big in the viewfinder of my camera! Dark brown, almost chocolate-colored on the flanks and abdomen, with cappuccino-colored spots on the head and back, which at times tinged with cream for a twist of the twilight.
And even in that moment of magic, all I could think of was to take another, stupid picture. He turned to the side, trying in any way not to look at me. Then, I understood and so lowered my gaze and the telephoto lens to the ground. Something like a light electric wave passed between us and immediately vanished.
Soon after, He got up and started to search for food, moving slowly, but with that special way at the same time naïve and determined that distinguishes Him. I followed at a distance, sparing the camera shots not to bother Him further and also because the light was almost gone. He ignored, perhaps accepted me. And so, once again, it was just me and Him in these humble Apennines: all for me, my dear old Marsican Brown bear!
Finally I was able to live again the true Italian miracle; perhaps, one of the best things that are left in this world. Full of gratitude and respect, in my heart I felt I had to solemnly bless those sacred moments and wondered why I was not allowed to live them every day.
The Bear, probably unaware of such clumsy mysticism, slowly climbed up the slope in front of me, elegantly reversing the gigantic stones He found on his path, and, when either my eyes or my camera could no longer make out His outline, I waved Him goodbye, heading rapidly in the opposite direction. My legs were flying over the rocks, as my head was elsewhere. I still had some way to go in the dark and reach my car. 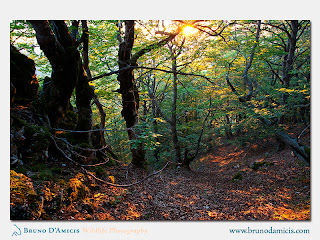 A day in June
Once again happily lost among the benevolent limestone peaks of the Apennines, I was following an ancient path that climbed among centuries-old beech trees. Out of the woods, the clearing appeared to me in all its radiant beauty, the deep-green grass was dotted here and there with huge boulders overturned, all blinding white in the summer afternoon. In some places the grass had been trampled by a large animal; the stems browsed on top. Then, a big black turd, fresh and full of vegetable fragments, has opened a world of possibilities. Once again I felt I was on His steps in His territory and I knew I was privileged. I had two more hours before sunset.
I sat between two large rocks and waited: my shape confused with the shadows, my smell hopefully brought away by the wind. Small clouds flowed fast in the sky; in the woods, a collared pigeon could not stop cooing and distracted me from my thoughts. A male roe deer, all proud in his beautiful summer coat, came timidly out to my right and now was nervously grazing not far from me.
Every now and then he suddenly raised his nose from the grass, pointing his ears to the treeline at the end of the valley, as in alarm. Hopeful, I followed with anxiety and mild adrenaline rush those sudden movements and stared at the woods along with the deer. In my heart, I was looking forward to the appearance of that unmistakable shape and the strong and healthy emotion that always accompanied it.

Waiting, thoughts, weariness, hope. Meanwhile, the light faded and a sylark was singing the end of that day, so small in the azure sky, and higher than any eagle. I was grateful that very lark had escaped the hunters last fall. It was all so beautiful, but it was late and I had to go home.
I got up and, not without regret, I did flee the roe deer, which already was barking away. While loading the backpack, I followed with the gaze how the trail entered the woods, dark as the mouth of a large animal. A slight shiver went along my back. It was certainly not the first time I went through the beech woods alone at night!
I left the clearing and entered the trees. As these thickened, my eyes could barely make out the outlines and the shadows seemed more a projection of my mind than real things. I was forced to keep my eyes fixed on the stones of the path, still visible, but I was reluctant to turn on the flashlight, indulging in that black and white world, devoid of any references.

Steps, rustling, the wind in the leaves and the squeak of dormice: the beech forest came alive. At every noise my heart was sinking; every curve of the path was a barrier to overcome. The air was fresh and, above my head, the black shapes of twisted beech trees were silhouetted against the first stars of the night. Rehearsing next to an old tree stump, which I had seen on the way up and that a bear in search of insects had completely destroyed with its paws, I thought back to the overturned stones in the clearing and I felt the power of that presence and, again, that electric wave. It was not fear, but a very strong and primitive feeling, which perhaps I could describe as a mix of sharp attention, increased sensorial capacity, intense communication with the environment and a profound sense of humility. 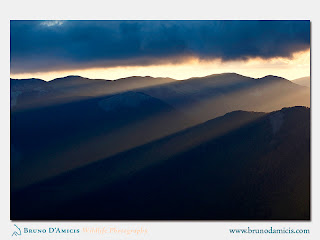 I felt so small and the world around me didn’t see anymore so obvious. It was strange, but I liked it. Step by step, it was clear to me thar it was something important, rare and which came from afar. And so I indulged in it: it was the gift of the Bear.
It was its mere presence, in fact, to establish the limits of those places: vast and timeless as the story they were telling. I wondered what would happen to the beech forest, to those mountains, if there would have been no longer bears. Who else would have allowed us, people of the third millennium, to experience those emotions like Pleistocene hunters? What else could have re-established the link between us and the wilderness?
One hundred, fifty, or just one, it does not matter: if there is still the Bear.
It would be nice, I said to myself, to share those feelings with others, even with those hungry "developers" of these mountains, or with whom can make major decisions but does not. It would be nice, yes, but I fear few would understand, because I know that the gift of the Bear is sadly outdated.
An hour and a half later I finally got to my car, woods and wilderness locked out of the vehicle. Later, in my bed, I thought back of the Bear. Maybe He was out that night, roaming under the stars as He always did, I thought, and so I slept peacefully, knowing that it was not a dream. 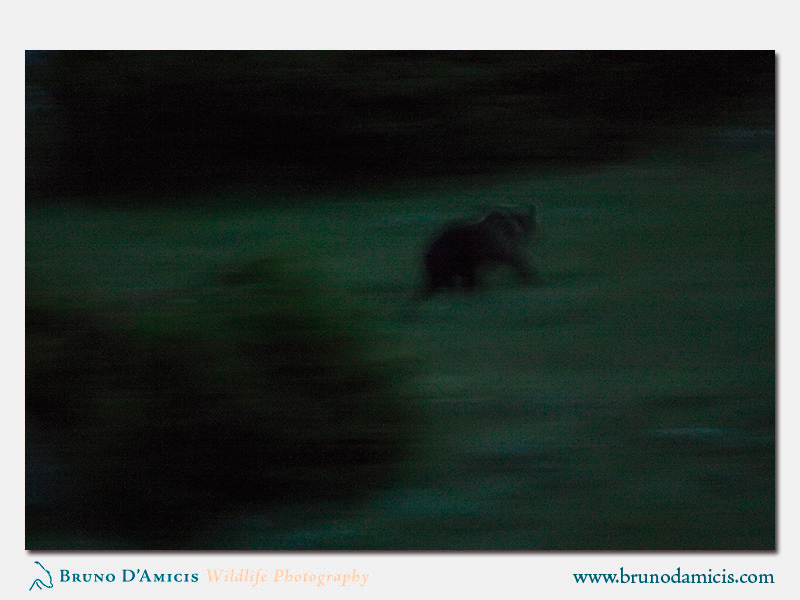